~ Wondering why you should use low-sodium chicken broth and beef broth in your recipes? Here’s the low-down on why we typically choose reduced-sodium broth and how we use it in cooking! ~ 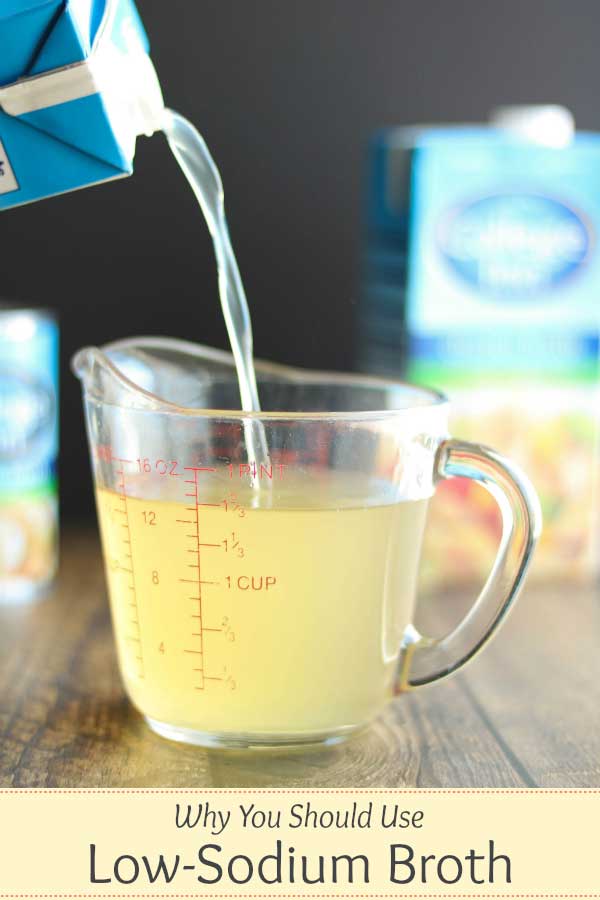 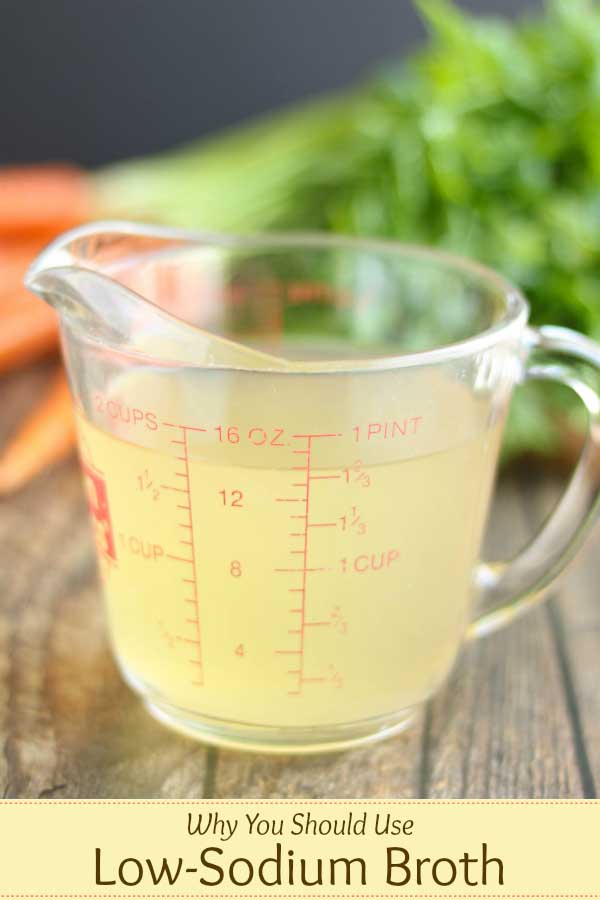 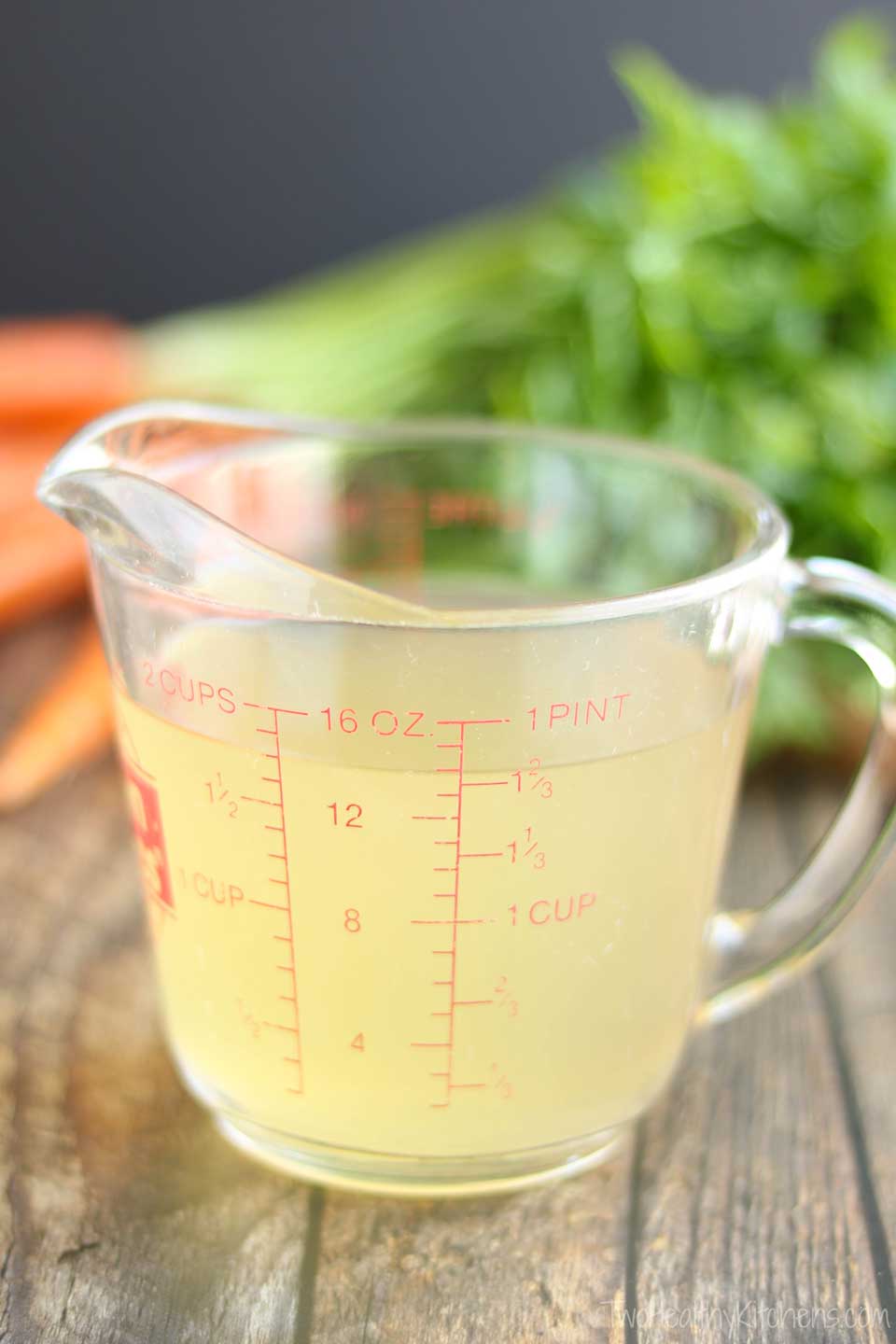 Here at THK, we’re all about saving steps where we can. It’s one of the things you guys love about us.

So, you might wonder why we almost always use low-sodium broth (aka reduced-sodium broth or lower-sodium broth) in our recipes … only to have to take an additional step later in the recipe to add in a bit of salt and adjust the seasoning.

Let’s start from the beginning …

What Is Low-Sodium Broth?

Many brands of beef or chicken broth will market a “standard” or “regular” broth, as well as a low-sodium version. The biggest and most obvious difference between the two options is that (no surprise here …) the reduced-sodium broth has less sodium in it than the “regular” broth.

What Are the Other Differences Between Low-Sodium Broth and Regular?

Interestingly, though … if you take a quick peek at the ingredient lists, you may notice that brands sometimes change up the exact formulation of their low-sodium broth, so that, besides being lower in sodium than the “regular” version, there may be other differences, too. For example, one mainstream national brand includes MSG in its “regular” version (surprise!), but not in its low-sodium counterpart.

We always, always urge you to read labels carefully so you know exactly what you’re buying. 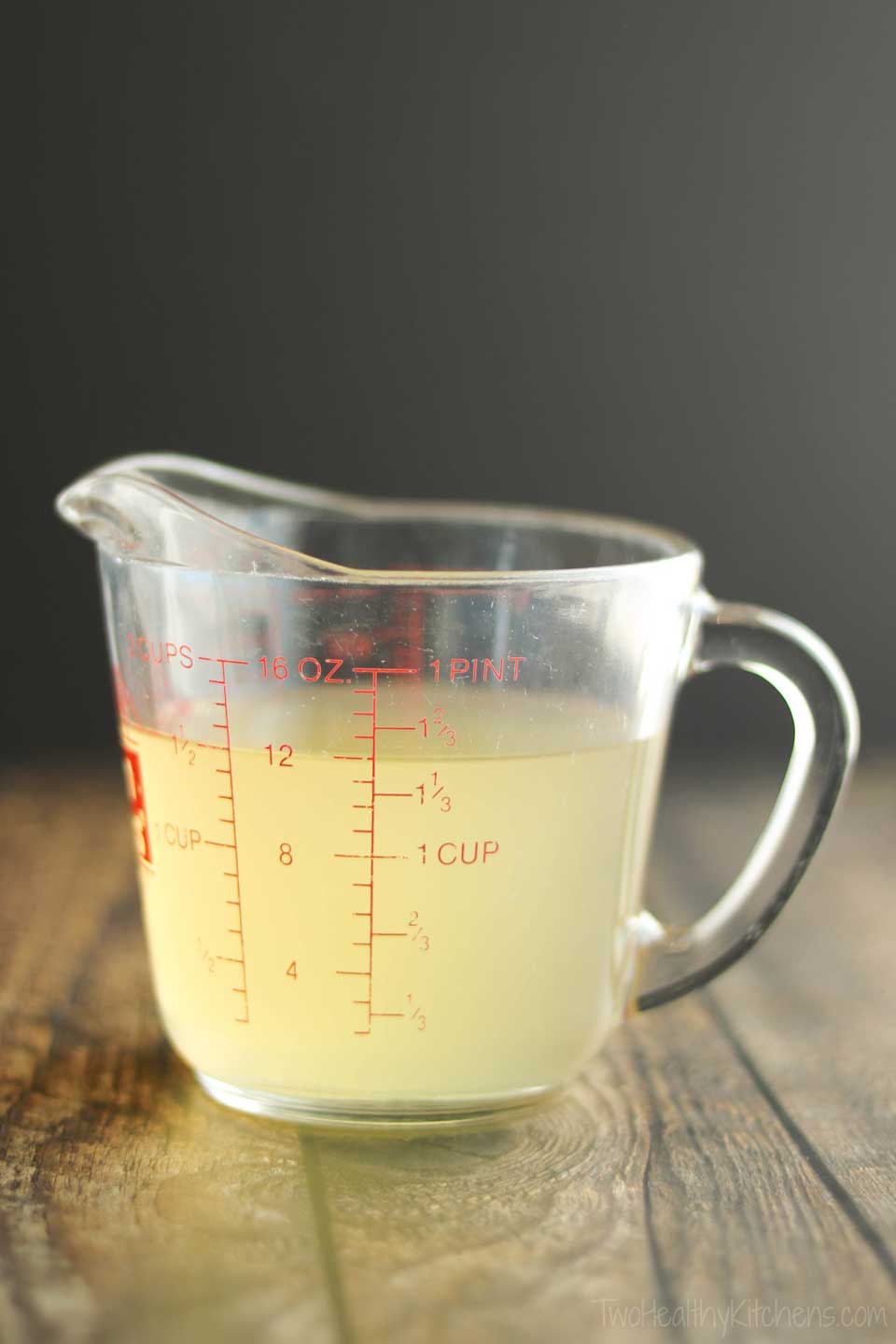 But, for the purposes of this article, let’s focus specifically just on the fact that low-sodium broths have less sodium … and what that means for all of us in our home kitchens.

So, Why Use Low-Sodium Broth?

It’s widely acknowledged that Americans consume far more sodium than we need. But, one of the benefits of cooking more meals at home is that you can control lots of factors – including sodium intake. Why would you add more sodium to your food than you need to, right?

As a health-minded cook (and recipe developer), I’m keenly aware of lots of nutrition parameters, including sodium. I’m always looking for the exact perfect crossroads … keeping things as healthy as possible while adding just enough salt to make a recipe taste fantastic. Control.

To be more specific:

1) If I start a recipe with a lower-sodium broth at its base, that allows me to adjust the seasoning at the end of cooking, while still keeping the sodium levels in check. Sometimes a final hit of salt (or a bit of salt added in steps along the way) really makes the flavors of a recipe pop, even more than the same amount of salt, added all at once earlier in a recipe, would. 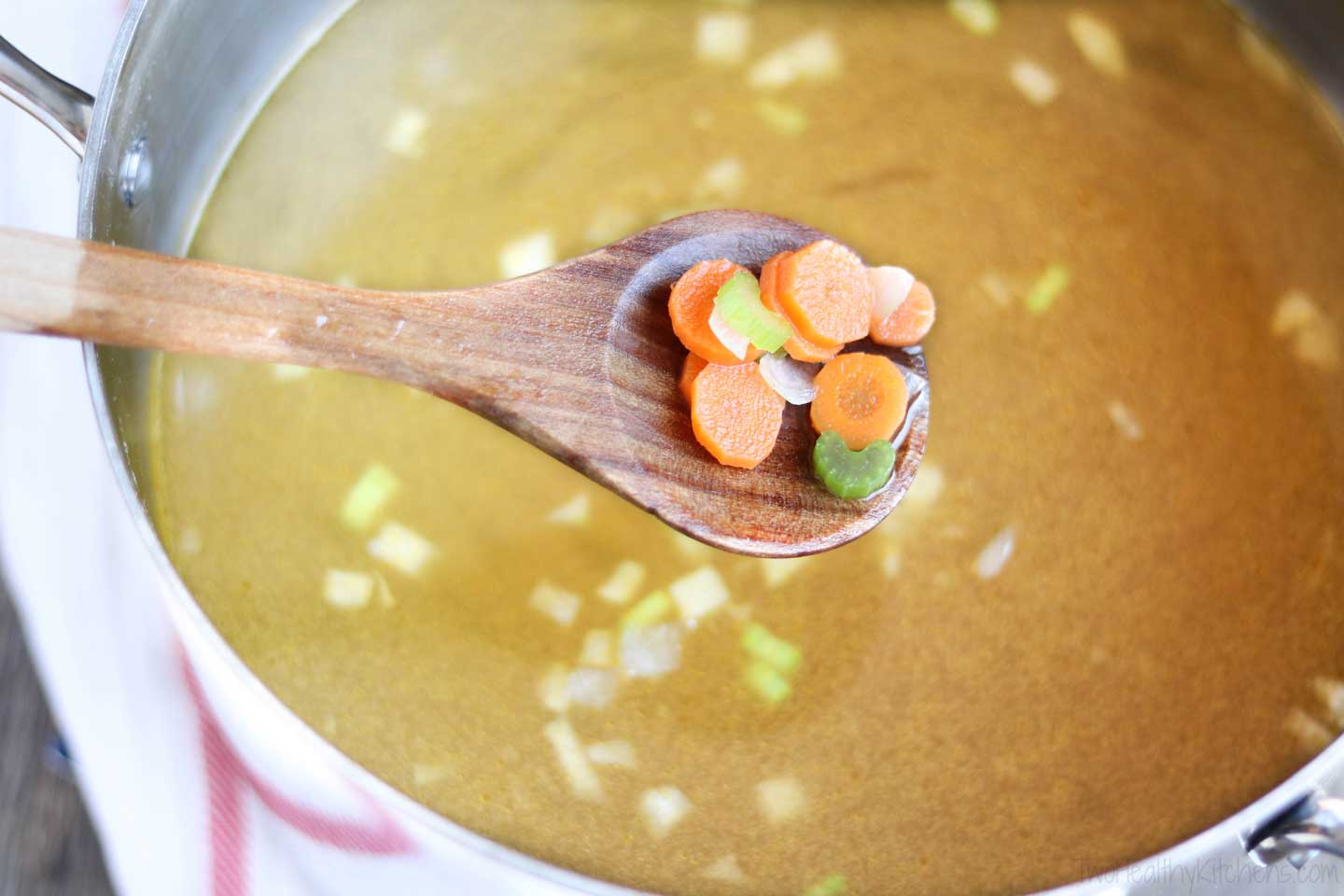 Most chefs will tell you that it’s best to salt at various stages throughout a recipe, and controlling the amount of salt I start out with in the broth gives me some wiggle room, so I can still add salt at other points in the recipe (like at the end) without going overboard.

2) Also, different people have different perceptions of saltiness, depending in large part on how salty the food typically is that they’re used to eating. So, while I like to write my recipes with a fairly concise measurement of salt that I think will be perfect to make the flavors sing, I know that different THK readers may want to adjust the salt they add at home slightly to fit their own tastes. Again … low-sodium broth gives us all that ability to control the flavors as we finish a dish.

3) Lastly, it’s particularly important to note that, if your broth is going to reduce much throughout the cooking process, that can amplify the salty taste. What I mean is that, as a broth reduces and there’s less liquid, the liquid you still have will have a higher concentration of sodium and a saltier flavor. 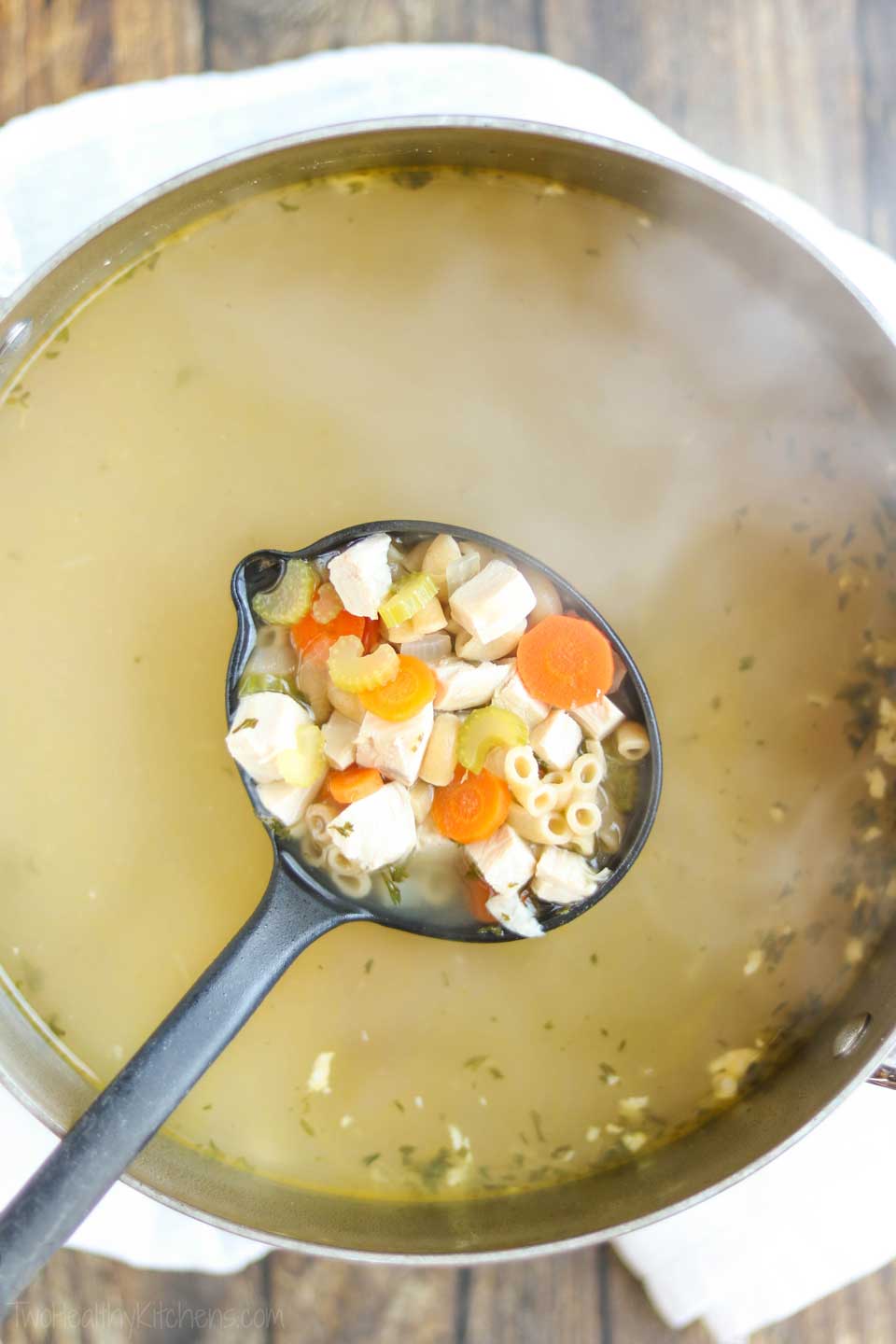 If you start with a “regular” or saltier broth, you may find that your final product is waaaaaay too salty once it’s reduced. In cooking school, they taught us not to use salt (or in some cases you’ll see recommendations to use very, very little) in preparing homemade broth and stock, specifically so that it wouldn’t become salty as it reduces.

And of course, a broth that starts out lower in salt gives you far more flexibility – far more control – when you’ll be using it in a wide range of different recipes with different flavors and sodium profiles.

One further benefit to using low-sodium broth is that those broths are also typically fat-free. Granted, most brands of “regular” broth don’t have much fat in them, anyway. But I prefer to trim even that little bit of unnecessary fat and go fat-free. When it comes to purchasing broth, fat-free and low-sodium typically go hand-in-hand.

Ok … So How Much Sodium Is In Low-Sodium Broth?

But, the amount of sodium in reduced-sodium broths actually can vary quite a bit from one brand to the next.

Again … the best thing to do here is to invest a few minutes in reading some labels and find a brand that has an ingredient list and nutrition label you feel good about. 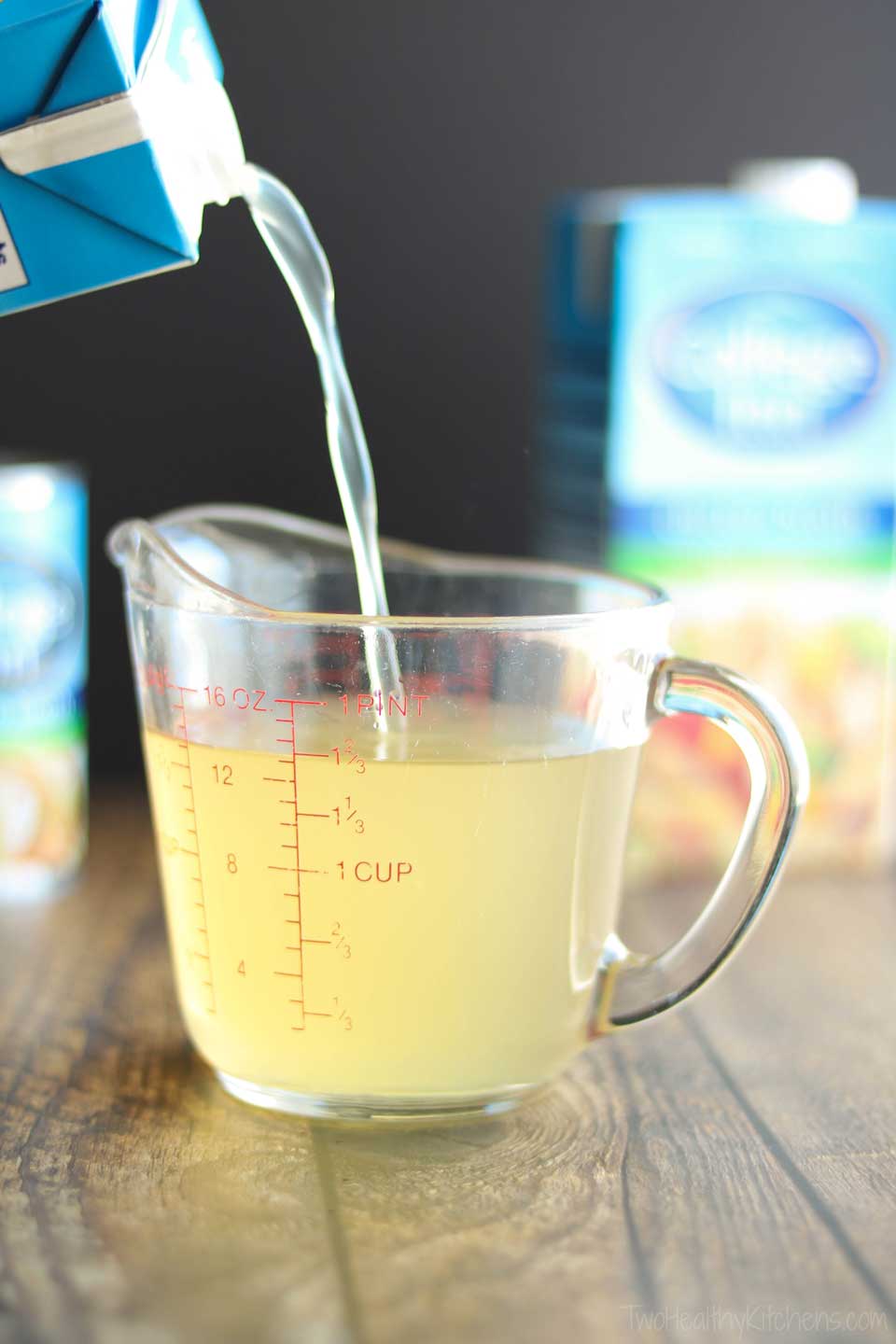 Then, you can adjust the final salt in any recipe if needed, depending on the amount of sodium that was in the brand of broth you chose to begin with.

What About No-Salt-Added Broths?

For most recipes here at THK, you’ll see that we don’t go all the way to a no-sodium broth. For most recipes, we find that having some salt in the broth is an ideal starting point and seasons the dish a bit at the beginning, but still allows us room to adjust at the end.

That’s not to say that no-salt-added broths can’t be a terrific choice, especially for people on significantly sodium-reduced diets. But, for our recipes, we generally find that we get the spot-on results we’re looking for by starting with low-sodium broths.

How Can You Use Low-Sodium Broth?

Easy! If you aren’t in the habit of grabbing reduced-sodium chicken or beef broth at the store, I think you’ll find it’s pretty easy to substitute into most recipes you’re already making.

Just remember that different brands have slightly different flavor profiles and levels of saltiness, so you want to find the brand that you like best, and adjust from there. Be prepared to taste your recipes at the end, adding a final flourish of salt if needed to punch up your dish a little. But … surprise … you may find that you need a lot less salt than you think! 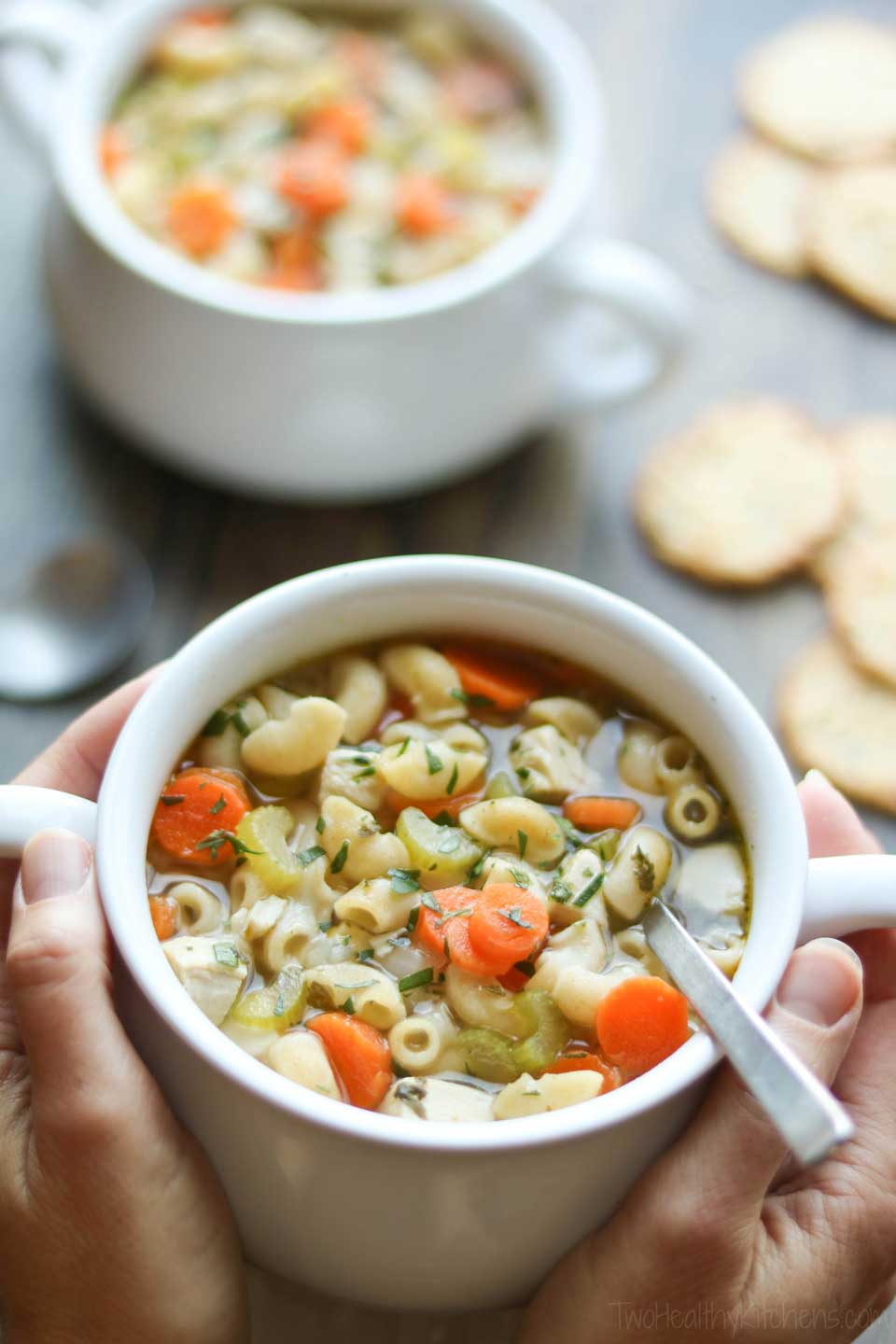 Here are some different recipes that use low-sodium broth in a variety of ways – from the base for soups, to a flavor boost in casseroles, to the liquid needed for creamy-dreamy sauces: 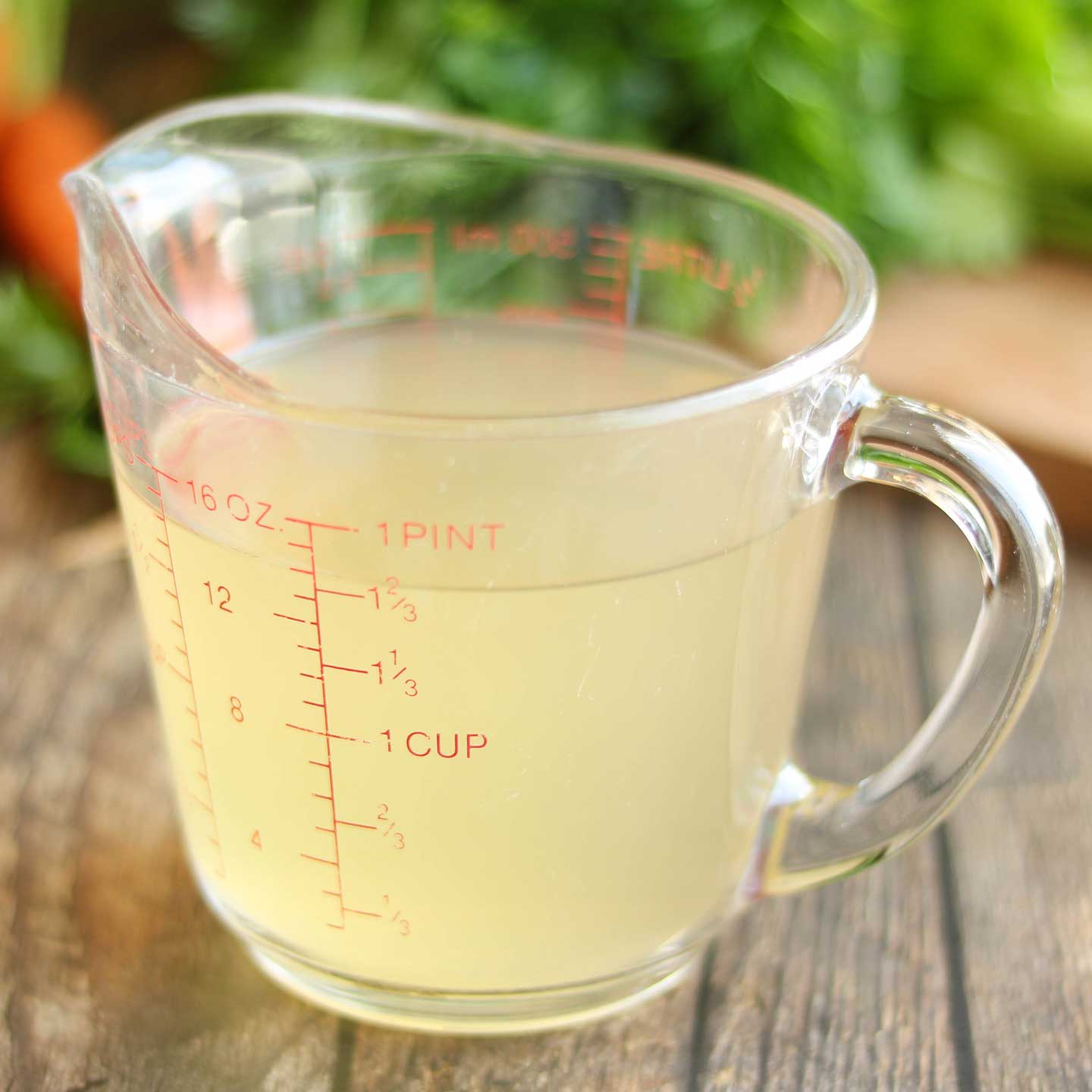