~ Meal Plan Tips to help you plan and cook smarter … because meal planning isn’t easy! For one thing … why is it that recipe prep times never seem accurate? How can a 30-minute meal take an hour to make in real life? Ever wonder how on earth those recipe times get calculated? Here’s how it all happens … and how you can leverage that info to cook smarter! ~

For a long time, here at THK, we didn’t include a specific preparation or cook time on the recipe card for each of our recipes, specifically because it can seem sooooo confusing, and so variable.

And, it can be frustrating when the promise of a 30-minute-recipe turns into an hour-long ordeal while hungry kiddos complain and ask “When will dinner be ready?” for the umpteenth time.

So here’s the scoop …

According to The Cook’s Cook magazine, when professional recipe writers create a recipe that offers a “prep time” there’s actually a very precise way they generate that time. And it’s a lot more accurate than you might think!

According to recipe writing rules (ummmmm … not sure who made up the standards …) the prep time should technically include only the time it takes you to follow the steps in the method instructions (with no regard for how much chopping and measuring might be needed up in the ingredient list portion of the recipe). So, if the ingredient list says:

… well, then, all that chopping and measuring and bean rinsing is NOT supposed to be tallied as part of the final prep time that’s listed. 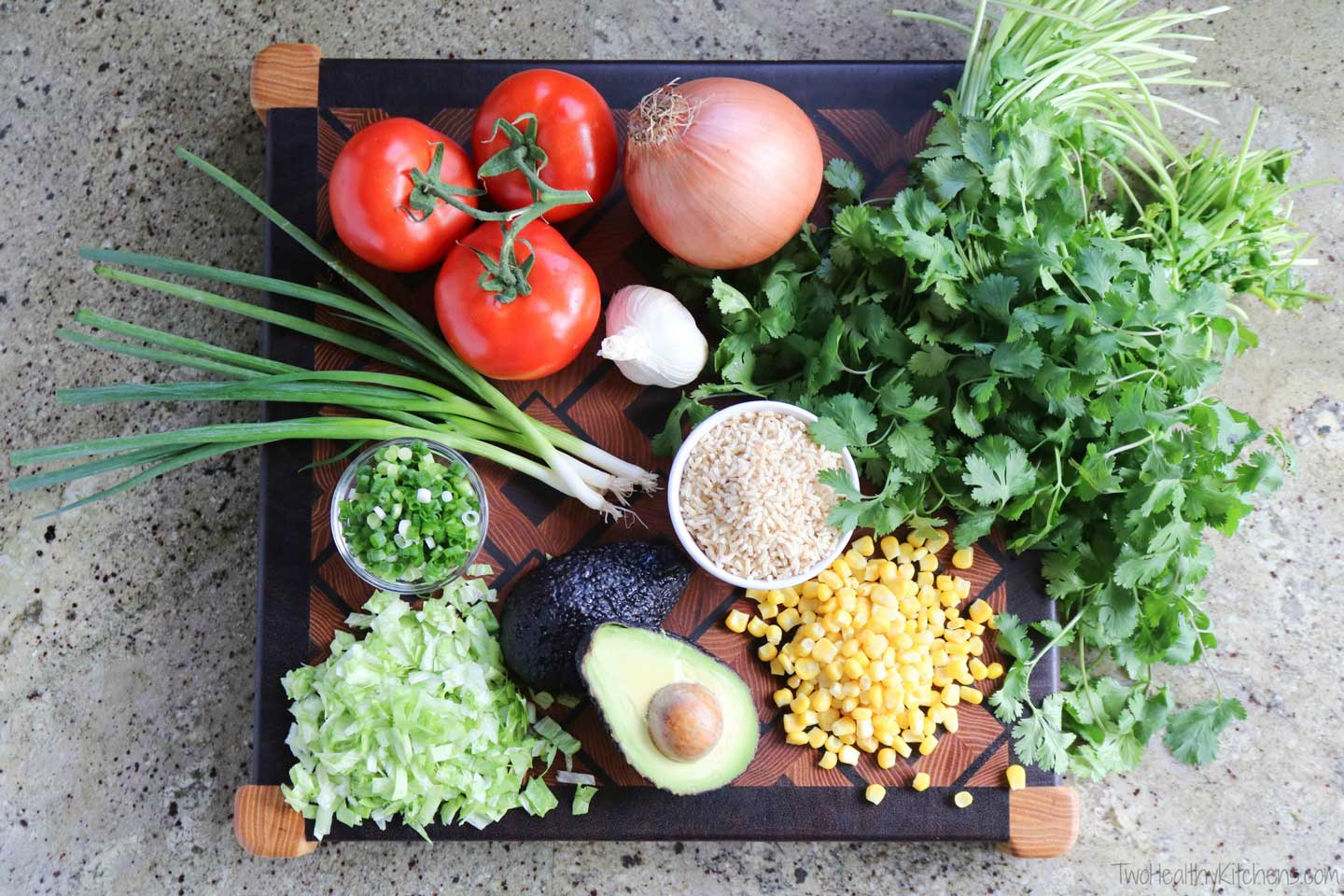 The recipe writer is supposed to assume that you (the cook) have already done all of it – that you’ve rooted through your fridge to find the green onions you bought last week, opened the new bag of rice (and wiped up the floor after you spilled a cascade of bouncing grains everywhere), and then dutifully measured and chopped everything so it’s entirely ready to go.

All of that pre-work (the looking for ingredients, the chopping, the measuring) is called mise en place in professional kitchens. It basically means that you’ve got everything ready, just as the ingredient list of your recipe states … and that you can now begin the actual process of mixing, whisking, stirring and cooking.

We have a whole ‘nother post coming your way with a little bit more about mise en place and what it means, but for now, the important thing to know is that professional recipe writers who follow typical standards for crafting a recipe won’t usually include all that pre-work in their estimated prep time.

That’s why a 30-minute meal can easily take you an hour, start-to-finish!

Welcome to the real world, right?!?!

So what can you do about it?

When you’re doing your weekly meal planning, and trying to figure out which recipes will actually fit into the (oh-so-tiny!) amount of time you have each day for cooking, there are some specific things to look for, to help you make better estimates and outsmart those tricky “prep time” estimates.

Sure, start by taking a good hard look at the prep and cook times on each recipe, which give you at least a vague idea of whether you might be in the 30-minute-meal ballpark, or the all-day-gourmet-extravaganza realm.

But then, move on to look at the ingredient list and read through the recipe directions. Look carefully and see how much chopping, measuring and pre-prep is involved, and estimate how long it’s going to take you to accomplish all of that. Consider things like:

1. Are you a quick chopper, or are you still working on your knife skills? 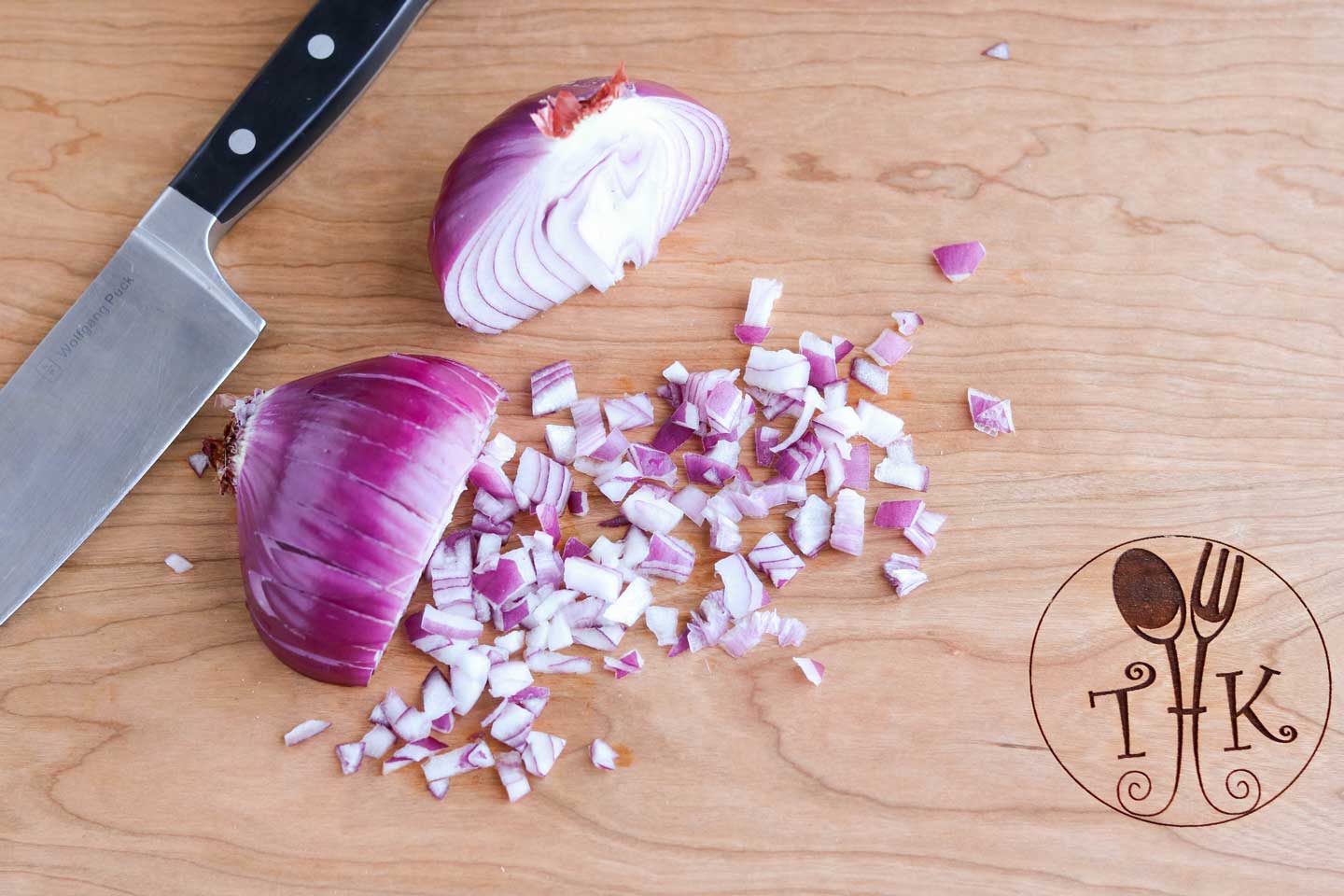 2. Do you have a ton of interruptions from your kiddos (oh no – math homework help!), or can you breeze through dinner prep all by your (super-productive!) self? Be honest with yourself, and you’ll get a more realistic idea of how long a recipe will actually take you.

4. Look for ways to buy some shortcuts! If you’re truly strapped for time but trying hard to create nutritious, home-cooked meals, then embrace some shortcuts! Many grocery stores have commonly used veggies precut for you in the produce section – things like peppers and onions. And if your grocery store has a salad bar, you can often raid that for small amounts of chopped veggies, too – which can save not only time but also the dilemma of buying, say, a whole head of broccoli when you only need just a small handful of florets. Another idea: if you need chopped, cooked chicken breast for a recipe, try starting with a rotisserie chicken – we do that all the time!

5. Always look for make-ahead steps. As you do your meal planning, scan each recipe for steps that can be prepped, or even cooked, ahead. For example, you can often pre-measure things like flour, cinnamon and baking soda, carefully setting them aside for later. Or, spices that get added to a recipe together could be measured out into a little bowl ahead of time, all ready to go. Also, most veggies can be successfully chopped at least a few hours ahead, and hardy veggies like peppers, onions, broccoli and cauliflower (if you didn’t grab them pre-chopped at the store) can usually be prepped even a day or two ahead with no problem. 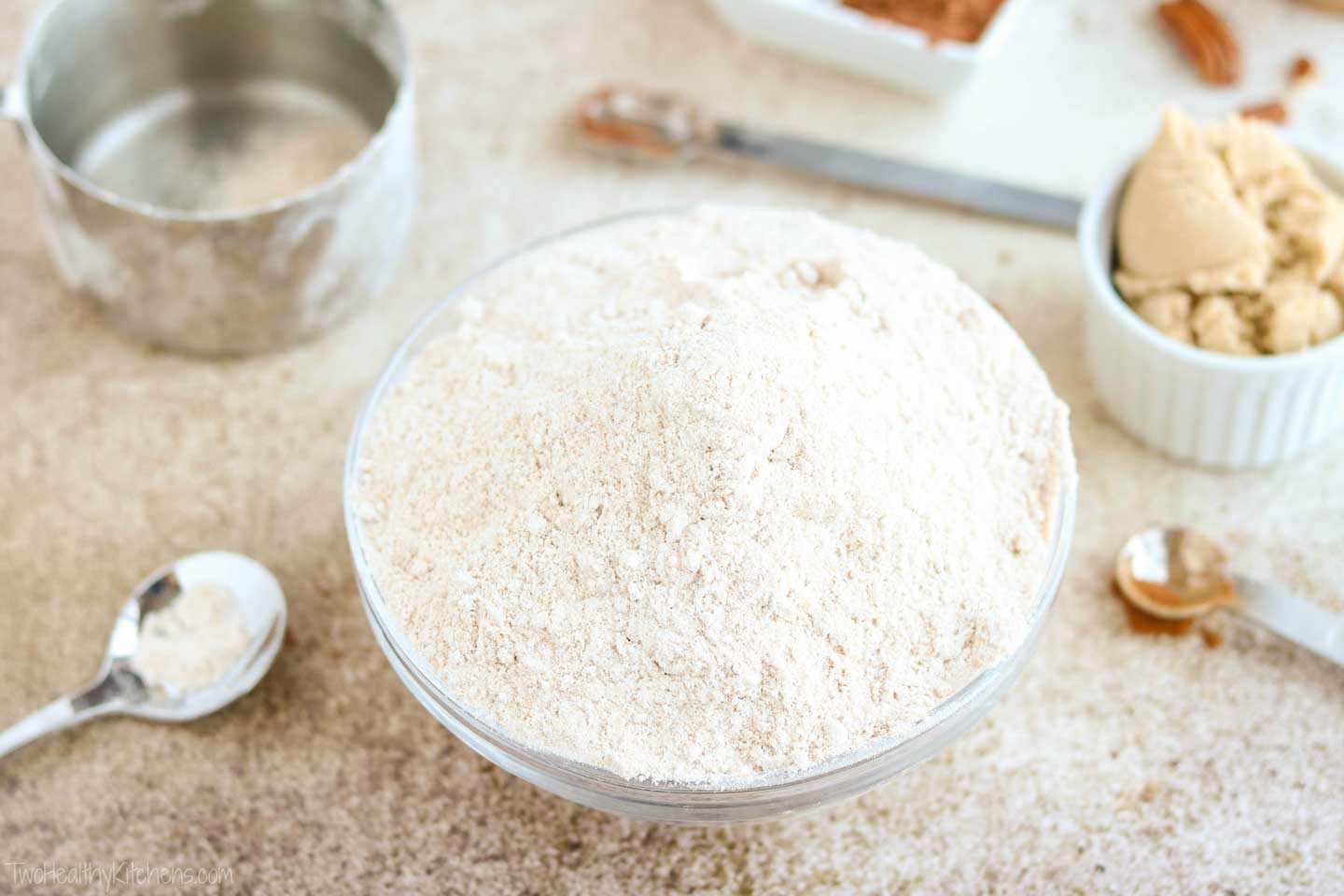 6. Be honest with yourself about your cooking style. Do you like to take your time, maybe sip a nice glass of wine and dance a bit to your favorite playlist … or are you laser-focused, on a get-it-done mission?

7. And how about cleaning up? Are you a clean-up-as-you-go kinda cook? If so, then it will probably take you a little longer to actually work through a recipe, since you’re (bravo!) keeping that kitchen tidy all along the way. Remember that recipes don’t figure in clean-up time (because, in pretend recipe writing world, there are apparently no dishes to wash). Now, please don’t get me wrong … I’m not suggesting you trash the kitchen in a mad dash to complete your 30-minute-meal in 30 actual minutes. We’re not handing out medals for that! Cleaning up a little along the way is usually a way better, much more efficient strategy in the end (my husband has spent years attempting to convince his messy cookin’ wife of this very fact!). And you’re going to have to spend time cleaning up eventually, anyway. (Unless, of course, you’re Rachael Ray and have a whole battalion of clean-up minions, in which case I just want to be you). Just be sure you take all of that into account in your real-world analysis!

So, How Does THK Calculate Recipe Times?

As much as we try to keep our recipe cards standardized and professional, I’ll tell you very honestly that we decided to buck the system a little on this one. A little!

We wanted to take the leap and finally begin including those pesky, elusive prep and cook times as a part of all our recipes (when we rolled out our brand-new recipe cards), but we wanted them to be truly useful for you. So … What to do? What to do???

Well, after checking in with a lot of other food bloggers, and doing way more soul searching than you’d think would be necessary for something as simple as meal planning … we finally decided that it just didn’t make sense to write our recipes in that “standardized” way that assumed you’d already done all the mise en place, as though you were in a professional kitchen following a recipe written for professionals. That just didn’t feel fair … and was sort of missing the personal part of why we created this blog in the first place (hint: to help people!). 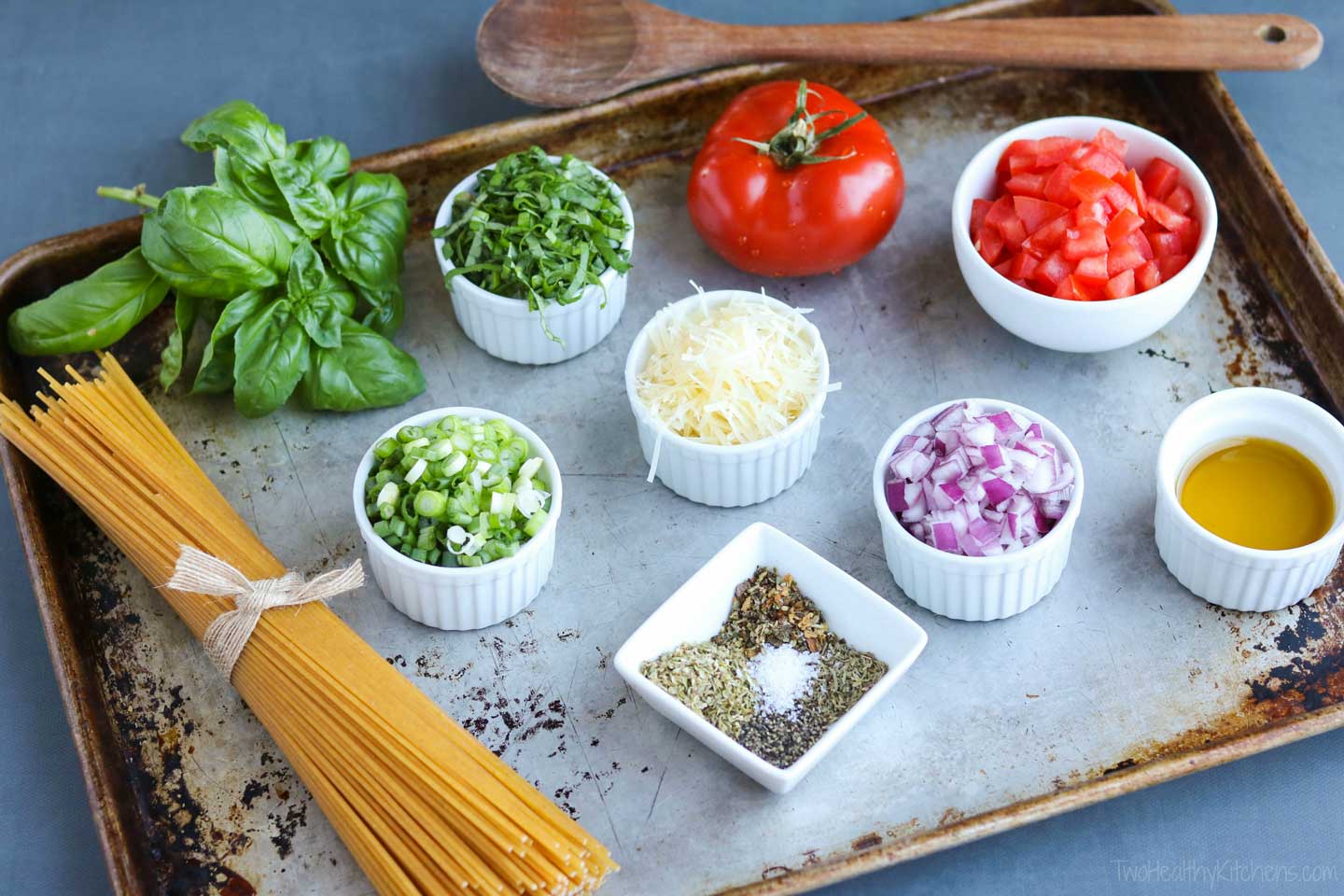 So, we decided that we would calculate our prep times a bit differently, in an attempt to be a little more realistic about how long a recipe will actually take you. I think most other food bloggers try to do the same. It’s part of what makes a personal food blog different from a professional restaurant or test kitchen – that ability to be, well … personal … and also to give you more info and more details about a recipe.

Well, to be honest – we estimate. We try to imagine what would be a general, universal, average amount of time it would take someone to measure or to chop … and then to stir and cook and cool. It’s an estimated average.

And that’s where we buck the system – by including most of the chopping and measuring times (the mise en place) that “The Cook’s Cook” says we shouldn’t technically include in a professionally written recipe.

Because we think it helps you meal plan smarter … to more accurately guess how long a recipe will actually take, in the real world. In your world! 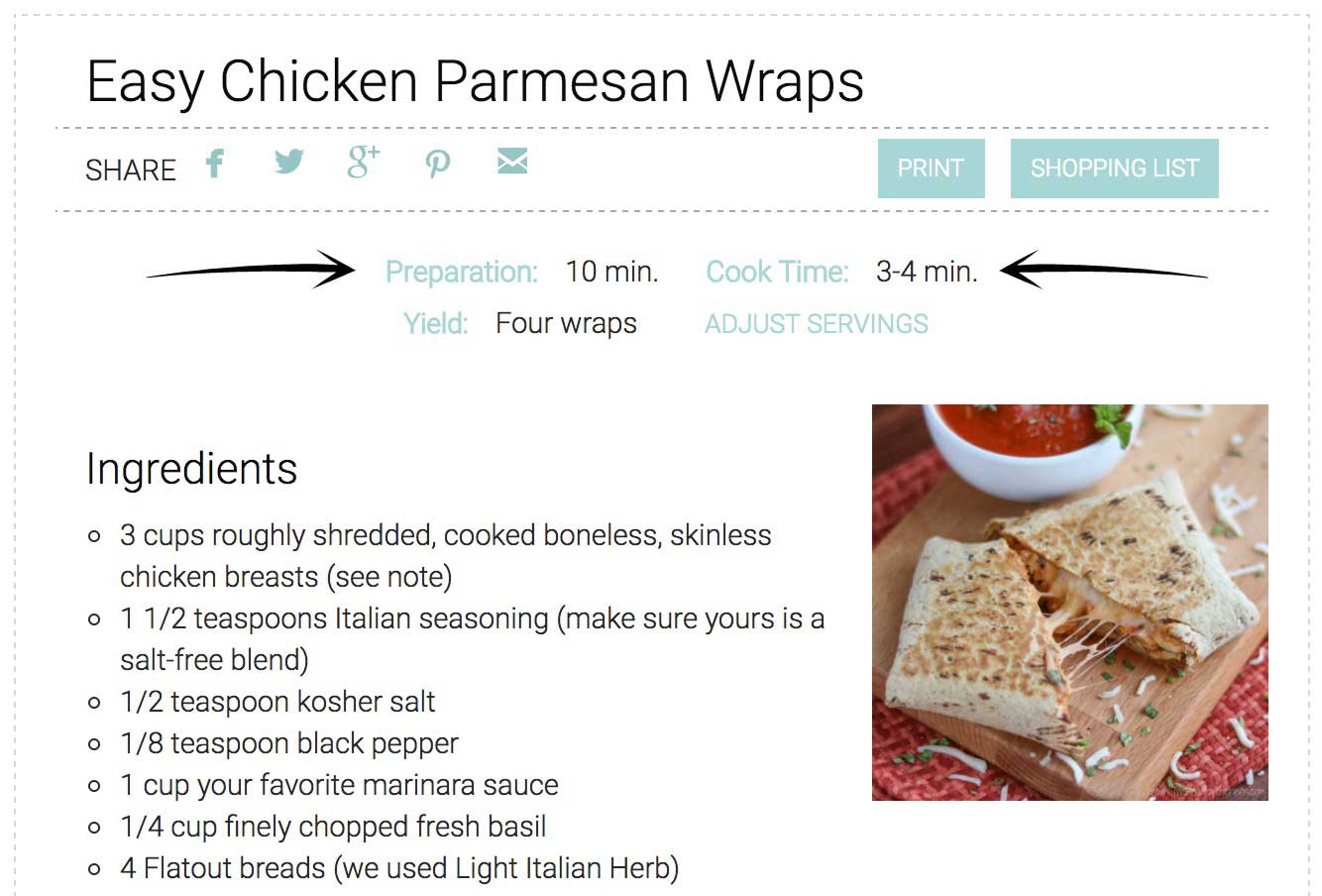 Whether you’re crafting a detailed plan for a special dinner party or just trying to survive a week of family meals … you’ve got this!

Now that you know the ins and outs of how prep times are calculated, you’ll have a better idea of how to be more realistic in your own planning! Plus, you’re armed with lots of make-ahead tips and tricks, sneaky ways to outsmart the estimates.

So, when your “30-minute-meal” timer starts running, you just might find yourself with an honest-to-goodness, actual 30 minute meal! Boo-yah! 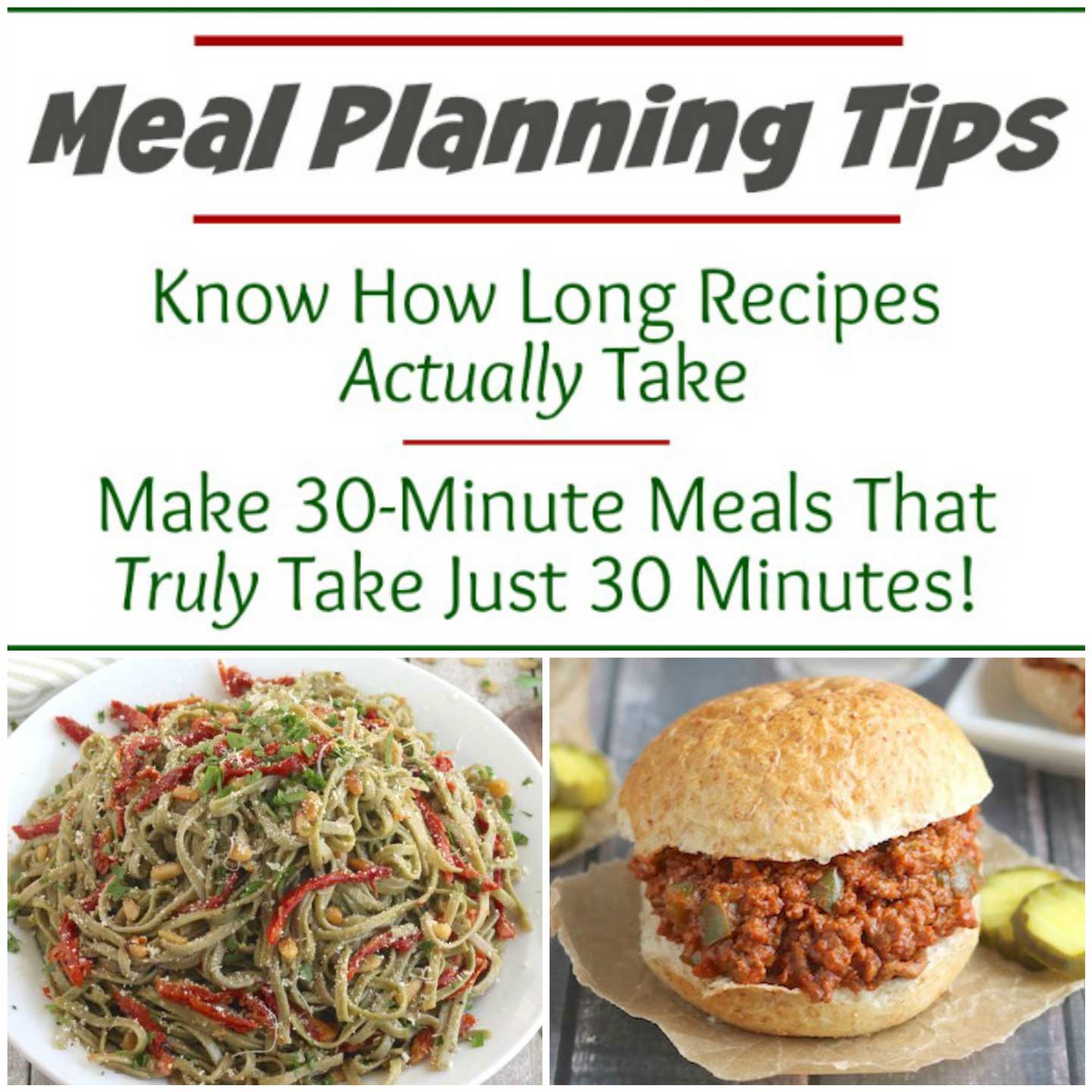