~ Spinach is a great way to amp up nutrition for the entire family! We’re taking you way, way beyond the ever-popular green smoothie! Here are easy ideas for adding this versatile superfood into the meals you’re already making! ~ 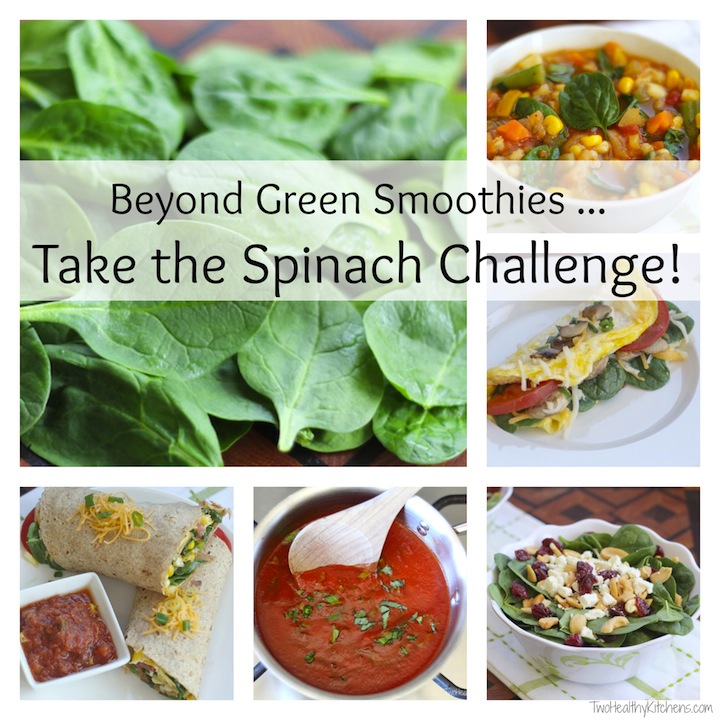 Green smoothies are all the rage on blogs and Pinterest – and for good reason!

The “green” in those green smoothies often comes from spinach – a superfood that’s low in calories, yet loaded with antioxidants, fiber and even a little protein. It’s also jam-crammed with vitamins and minerals, including folate, vitamins A and K, manganese, and magnesium. The list goes on and on!

Spinach is even thought to help fight some signs of aging – it’s no wonder Popeye looked so young!

Yep – just a handful of spinach blends a whole lotta nutrition into your favorite, already-healthy smoothies, and you can’t even taste that it’s in there. No, really! It’s just brilliant!

And sure – here at THK, we love green smoothies as much as the next guy (or … gal). Maybe even more! 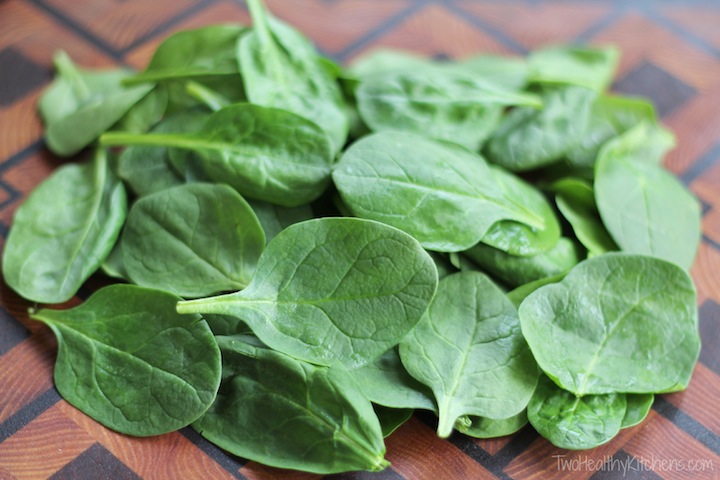 Raw baby spinach has such a mild, almost unnoticeable flavor, that it easily melds itself into all sorts of recipes without creating even a little commotion.

In fact, you might have noticed that our last three recipes (Mediterranean Confetti Quinoa Salad, Creamy Tomato and Sausage Pasta, and our Healthier Take on the Shamrock Shake) all had baby spinach quietly lurking in them – it’s a snap to incorporate this health-food hero into recipes without disrupting other flavors and textures!

And you actually don’t even need a recipe! It’s so easy to tuck spinach into impromptu meals, snacks and warmed-up leftovers. 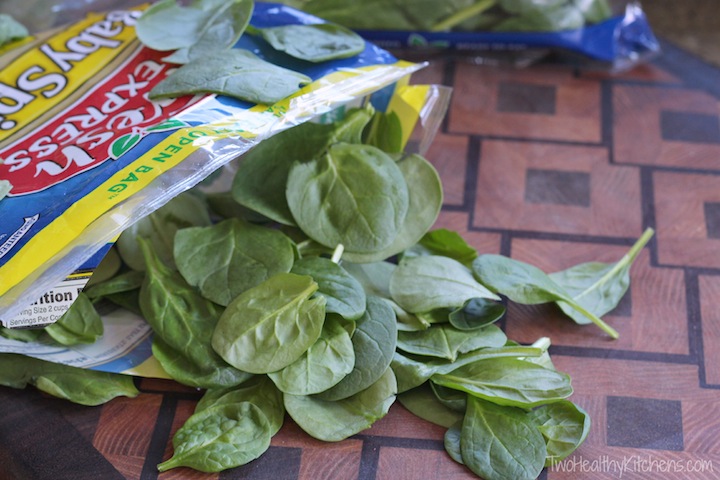 So, try this challenge:

Next time you’re at the store, simply grab a bag of baby spinach to keep in the fridge. Then see how many ways you can find to work some into what you’re making that week.

You’ll be amazed at the result!

By the end of the week, that bag of spinach will likely be empty … and you’ll have effortlessly ramped up your nutrient and veggie intake without even realizing it!

To get you started, here are eight super-easy ideas. Not new recipes – just inspiration on how to amp up the nutrition of things you’re already making and eating anyway.

We see lots of Spinach Challenge victors on the horizon! 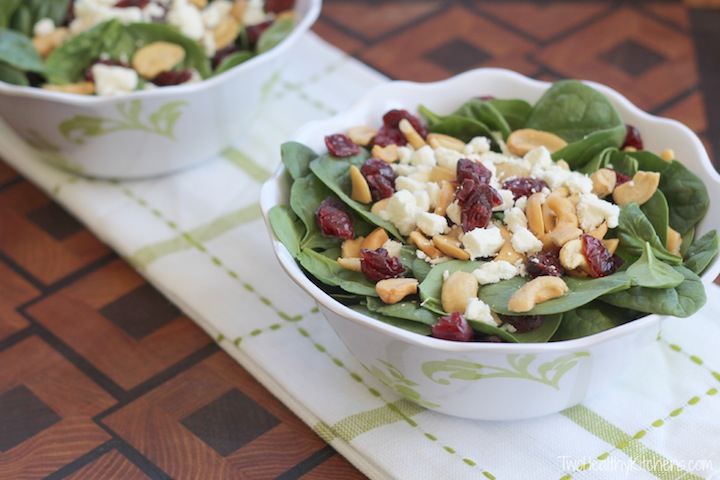 1) Of course – salads are a spinach no-brainer! Remember our battle of the salads, with Shelley’s Spinach Salad with Cashews, Feta and Cranberries? And then there’s our crazy-delicious Spinach Salad with Apples, Cheddar and Smoked Almonds. Any time you need to fill out a meal with some extra veggies, or even want a little snack … toss some of your spinach with any other handy ingredients … and call it a salad! Easy! And, if you’re re-warming leftover proteins like chicken, salmon or steak, serve them on a bed of spinach to turn them into a healthy, hearty salad. Leftover fajitas or taco fixin’s from last night’s dinner? Sounds like you’re having a Mexican-inspired taco salad for lunch today (mmmmmmm …)! You get the idea! 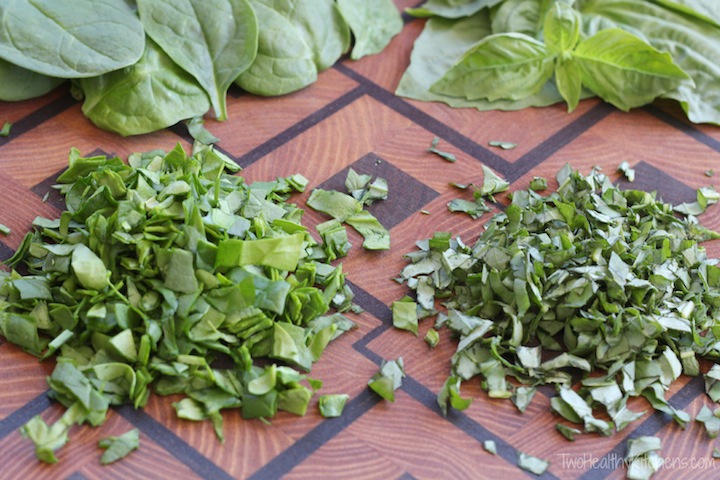 2) If you read our series of posts on Tips for Picky Eaters, then you know we’re not huge fans of constantly hiding veggies to “trick” kids. Still, there’s no harm in adding some spinach in with other ingredients that look just like it! Anytime you’re stirring chopped fresh herbs (especially basil) into recipes for pasta salads, casseroles, lasagna, or sauces (like in our Creamy Tomato and Sausage Pasta), chop up some baby spinach right alongside, and mix them both in together. Veggie-suspicious kids will generally just assume all the green stuff is basil (as will adults who swear they don’t really care about healthy eating!). Peek-a-boo … hello there, spinach! 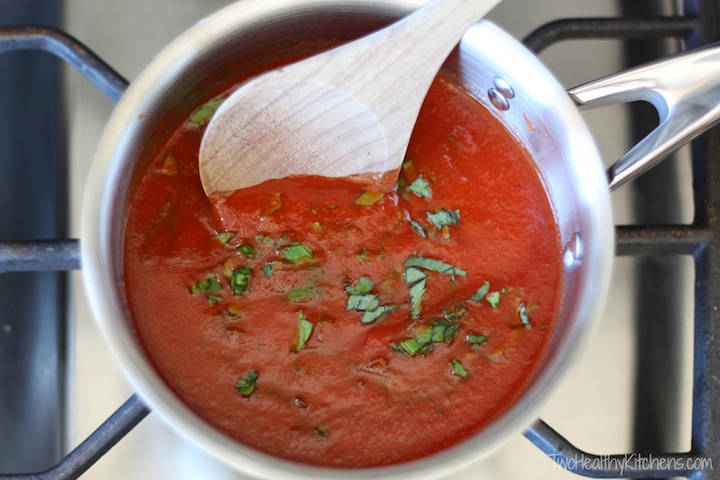 3) Similarly, you can even chop up some spinach (maybe along with a bit of basil) and stir it into jarred pasta sauces to amp up the nutrition and add some great fresh taste and color. Spinach just seems to have a magical way of disappearing into foods – you can add a surprisingly significant amount of spinach without it taking center stage. 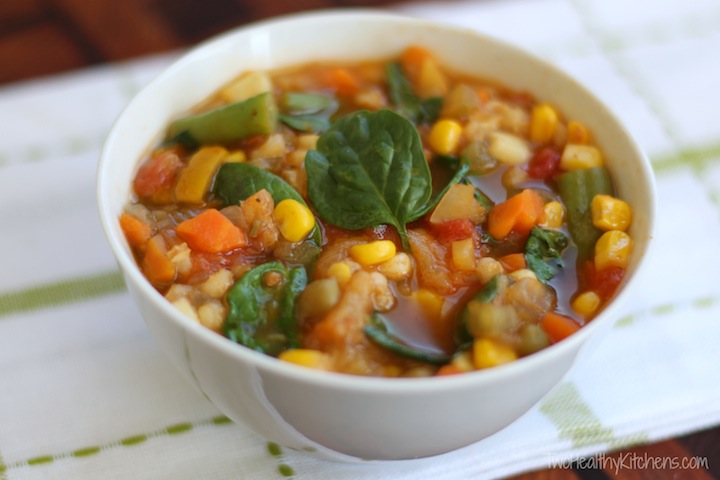 4) Toss a handful of spinach into soups at the end of cook time, or as you re-warm leftover soups, stews and chilis. It wilts down so much, you end up stirring in more … and more … and even more … 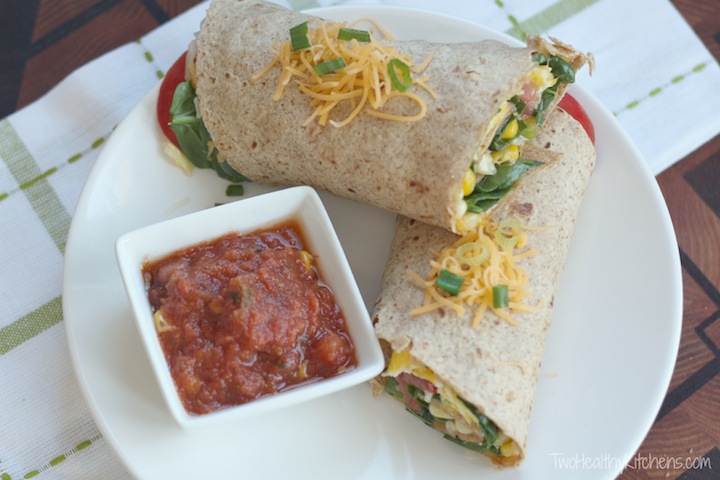 5) Want a power breakfast that can totally go portable? One of Shelley’s faves is a breakfast wrap: some scrambled eggs layered with a little reduced-fat cheese and whatever veggies are on hand … onions, peppers, tomatoes, corn … and SPINACH (of course!). If you’re not in a hurry, you can change things up by using corn tortillas and, instead of wrapping them up, leave them flat … breakfast quesadillas! Serve with tons of antioxidant-rich salsa for dipping (yum!). 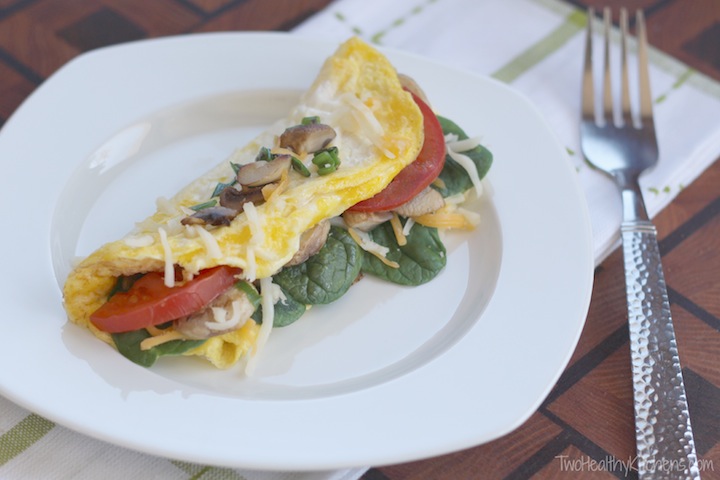 6) Or, tuck some spinach into your favorite omelet. You can even stir it into scrambled eggs, or create a big-bowl breakfast scramble with eggs, veggies (including spinach!), and maybe a little bit of low-fat cheese or turkey sausage. 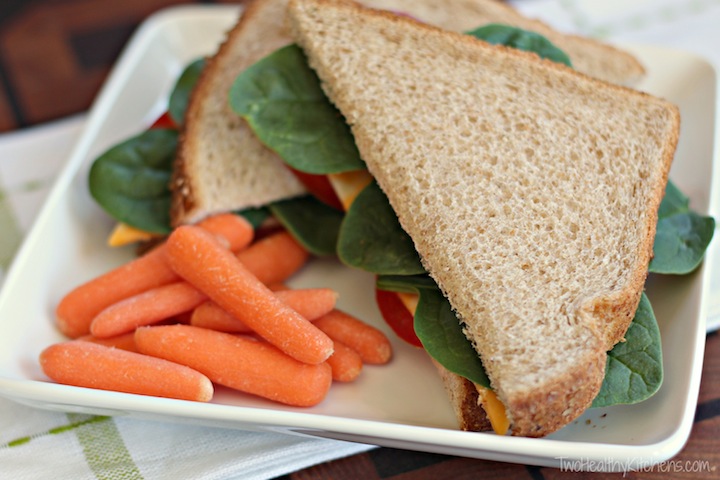 7) One totally easy swap is to sub spinach into sandwiches or wraps any time you’d normally use iceberg lettuce. Spinach beats iceberg in a nutritional showdown, and adds even more gorgeous color! Bonus! Also, when you order a sandwich at a sub shop or restaurant, tell them to skip the iceberg lettuce (they’re happy to pile that on, since it’s a really inexpensive ingredient that takes up lots of room and makes the sandwich look big) … and ask for extra spinach instead. Skip iceberg and reach for spinach and other more nutrient- and antioxidant-rich, darker greens when filling your plate at salad bars and build-your-own-salad restaurants, too. 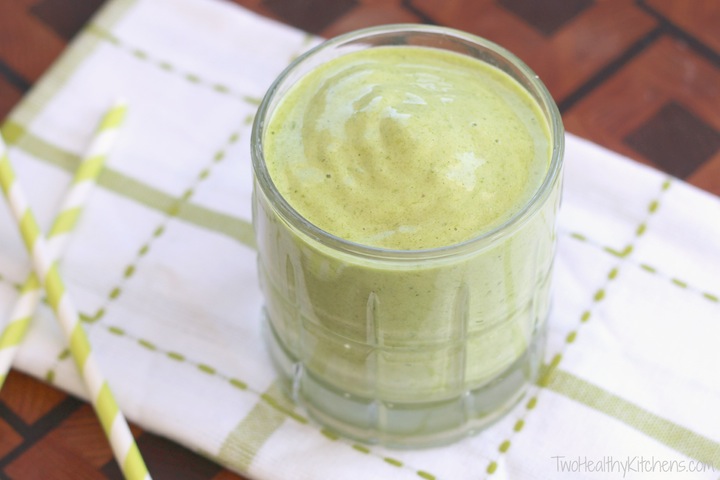 8) Feeling totally crazy? Try blending some spinach into milkshakes for a healthier dessert. No kidding! Just like when you blend it into green smoothies, spinach has very little flavor to interact with the flavors in milkshakes. When we developed the recipe for our Shamrock Shake, we were blown away by just how much spinach we could blend in (3 cups!) without anyone tasting it at all!

So come on! What are you waiting for? Take our Spinach Challenge and let us know how you use up that bag of spinach!

32 thoughts on “Beyond Green Smoothies: Take the Spinach Challenge”