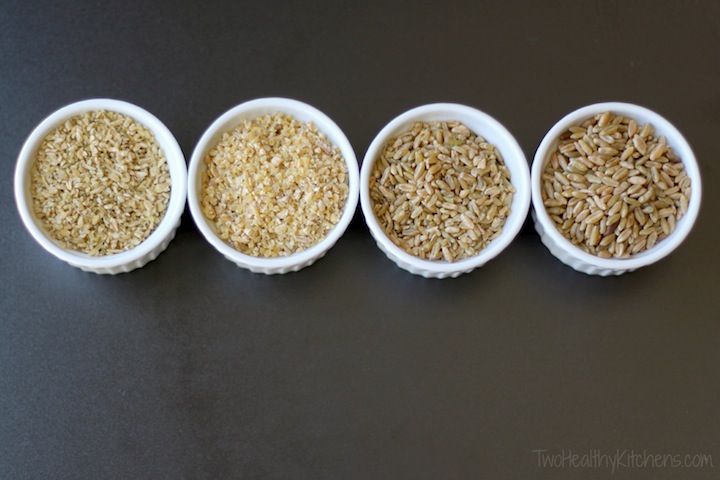 Just when you’d gotten the hang of quinoa, freekeh burst onto the nutrition scene … and once again, you’re wondering how to work yet another grain into your family’s healthy meals.

Sure … freekeh boasts loads of protein and fiber (listen up, quinoa lovers!), plus lots of other healthy goodies … but just what are you supposed to do with it?

Not to worry – it’s easy! And we’ve got the answers!

We’ve done oodles of research and recipe testing (you know – that’s how we roll here at THK), and we can’t wait to share with you what we’ve learned!

We finally feel like freekeh is common enough that most of our American readers can track it down without too much trouble (as in, we can even find it here in Ohio!), so the time is definitely right for a good heart-to-heart chat about this latest health-food darling. 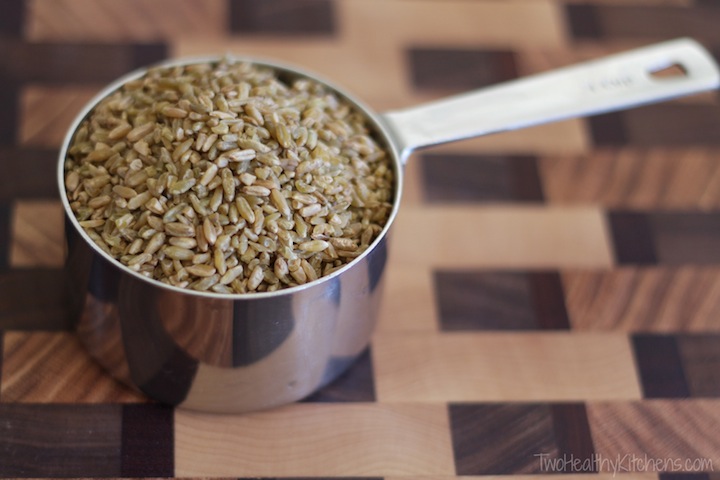 So, What Is Freekeh?

Freekeh (pronounced free-kuh or free-kah … the name alone is great!) is an ancient grain, often mentioned right alongside other superfood heroes like quinoa, spelt, amaranth and farro. You might also see it spelled freekah or frikeh, or called farik or fireek (that’s quite an identity crisis for a tiny grain!).

Regardless, freekeh is essentially wheat that has been harvested early, while the grains are still tender and green. The kernels are then parched, roasted, dried and rubbed.

Technically, the term freekeh is actually the name of a process used to prepare grains, and not the name of a specific grain variety. However, it typically refers to wheat, and generally to durum wheat. So, although the freekeh process can be applied to other grains (such as barley), what you find on American shelves is usually wheat, and should be clearly labeled as such. 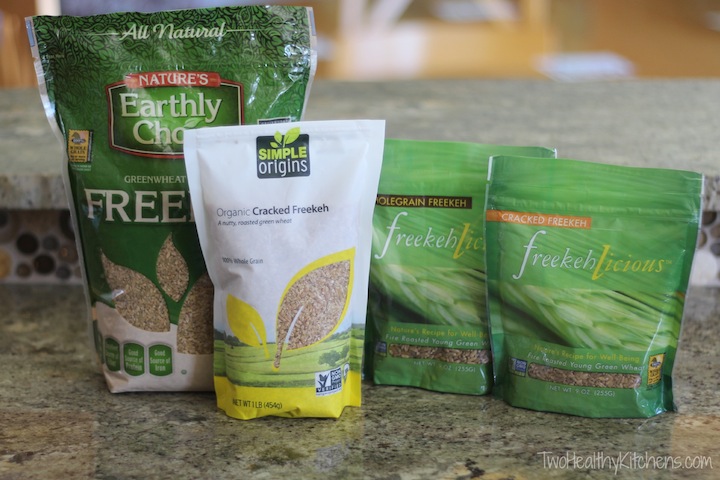 The History of Freekeh

According to food lore, freekeh’s fiery story dates back thousands of years, possibly as far back as 2,300 BC. Allegedly, a Middle Eastern village came under enemy attack and their crops of young, green wheat caught fire during the siege. The villagers ingeniously found they were able to salvage their food supply by rubbing away the burned chaff to reveal the roasted wheat kernels inside. This is what we know today as freekeh, which means “to rub” or “the rubbed one.”

Freekeh became common in Mediterranean and Middle Eastern cuisines and has long been part of the food culture in countries such as Jordan, Egypt, Lebanon and Syria. It’s also become extremely popular in Australia, where modern processing of Freekeh originated.

How to Use Freekeh in Recipes

Freekeh works beautifully in lots of dishes – it’s delicious in casseroles, soups, pilafs and salads like our Kale Chopped Salad with Berries and Freekeh. You can also try it for breakfast as a hot cereal or as a parfait that’s layered with yogurt and fruit in the same way you might eat granola or oats.

Besides using it in recipes specifically developed for freekeh, you can also try subbing it in for rice, quinoa, farro, and other hearty grains. 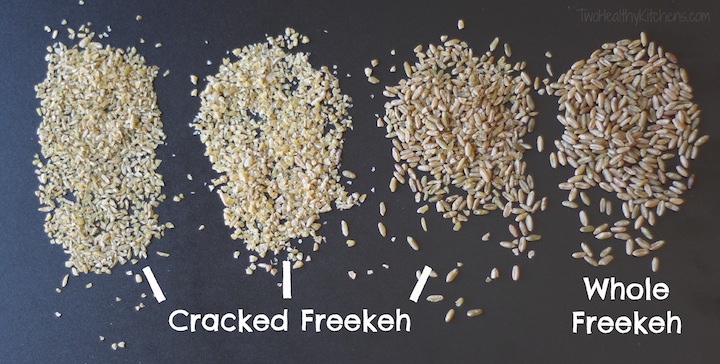 Freekeh is sold as “whole” or “whole grain” and as “cracked.” That might seem confusing, but basically, “cracked” freekeh has just been broken into smaller pieces. This allows cracked freekeh to cook faster (which is why we typically choose cracked freekeh here at THK), and also gives it a slightly different texture.

We were really surprised to find what a wide range of sizes cracked freekeh comes in, depending on the manufacturer. Some cracked freekeh is nearly as large as hearty, chewy “whole” freekeh and is sometimes described as reminding people of bulgur, while other brands are cracked so small that they have a much more delicate texture closer to quinoa.

If you’re lucky enough to have a selection of more than one brand, choose whichever best fits the texture you’d like to achieve in your recipe. 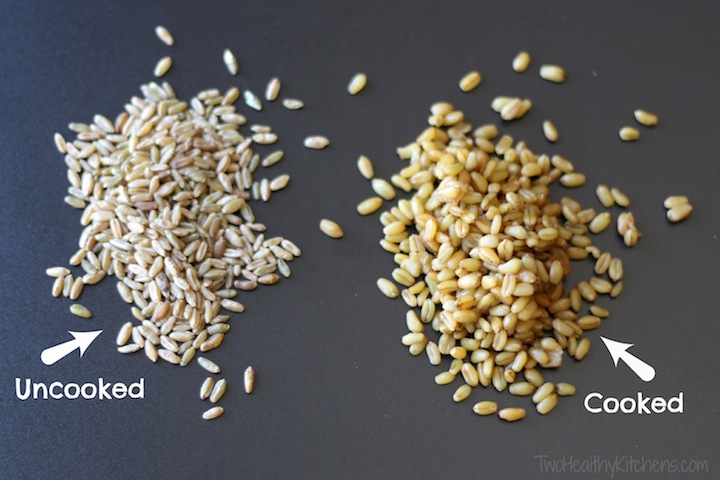 How to Cook Freekeh

Freekeh is really simple to prepare – definitely quick and easy enough to be a mainstay here at THK!

Basically, cooking freekeh is just like cooking quinoa and many other grains. You combine the freekeh with water (and sometimes a bit of optional salt) in a saucepan, bring it to a boil, then cover it and allow it to simmer. So easy, right?!

Different manufacturers also recommend slightly different ratios of freekeh to water. Generally, it’s about 1 part freekeh to 2 or 2 1/2 parts water. Some companies suggest that you cook the freekeh until all of the water is absorbed (similar to the way rice is often cooked), while others have you use a larger proportion of water and then drain away the excess water at the end of cooking (similar to how you’d cook pasta). We’ve found that either of these methods works just fine and will produce great results.

So again – we suggest that you go with the directions for the brand you purchased, but keep in mind that the directions might not be the same if you select a different brand next time around.

Similar to quinoa, we find that 1 cup of uncooked freekeh yields about 3 cups cooked.

Once cooked, freekeh should keep, covered, in your fridge for several days.

What could be easier than that, right? Well actually … how about freekeh in a pre-cooked, ready-to-microwave pack? We’ve heard rumors of such marvels at west coast Trader Joe’s locations, but we have yet to see anything like that here in Ohio … 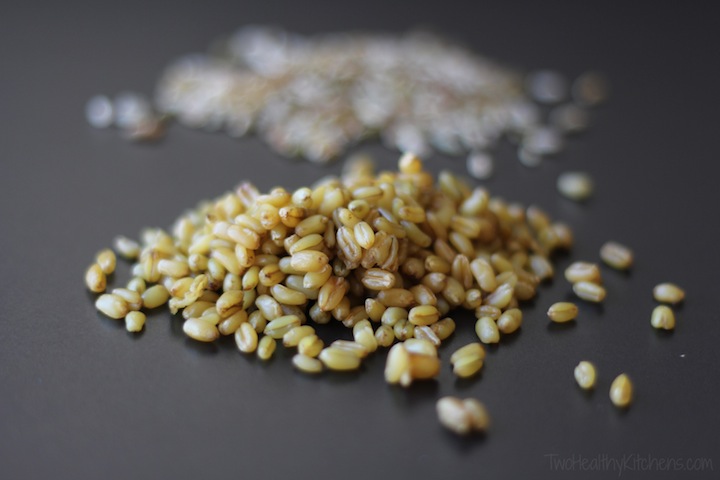 Freekeh is a 100% whole grain (regardless of whether you buy it in “whole” or faster-cooking “cracked” form).

There isn’t a tremendous body of research on Freekeh here in America (yet). However, studies in places like Australia have shown that, because it’s harvested at an earlier stage of development, freekeh contains higher levels of fiber, protein and certain minerals than more mature, typically processed wheat.

Freekeh is high in vitamins and minerals, and in both fiber and protein. In fact, freekeh has notably more fiber than brown rice and even quinoa!

Also, in a head-to-head comparison with superhero quinoa, freekeh wins on other points, too. It has slightly fewer calories than quinoa, and more protein. Surprised? Yeah, we were, too! It also has a relatively low glycemic index as compared to many other grains.

Besides all that protein and fiber to help keep you feeling full longer, freekeh also has been shown to contain resistant starch, which further enhances that feeling of fullness and satiety. Early studies also suggest that freekeh has prebiotic properties that may promote digestive health.

Freekeh is not gluten-free (remember – it’s wheat). That’s one decisive point that separates it from gluten-free (but also high-protein) quinoa.

But, you may have heard that freekeh is easier for slightly gluten-sensitive people to digest. The thought here is that, although freekeh contains gluten, the harvesting and processing methods denature the gluten and may also cause other differences in the gluten and enzyme structure of the final product.

However, it’s important to understand that research regarding freekeh and gluten (as well as its resistant starches and prebiotic properties mentioned earlier) is all still relatively preliminary. If you’re gluten-sensitive, have allergies to gluten, or have specific questions about how freekeh can fit into a specialized diet, you should definitely talk with your doctor or nutritionist before trying freekeh.

For more information on freekeh’s nutrition profile and how to cook it, check out these great sites, which we found incredibly helpful in researching and writing this article:

Mmmmmm … and after all this cerebral nutrition talk, you’re probably getting hungry! For inspiration and great freekeh recipes, check out:

And, if you love delicious, nutritious whole grains as much as we do, be sure to hop over to our post on How to Cook Quinoa (and Why You Should!). Loaded with great information, it’s one of the most popular posts we’ve ever written!

Top 10 Freekeh Recipes + A Giveaway!
Kale Chopped Salad with Berries and Freekeh (or Quinoa)
Hearty Fruit and Nut Salad with Greek Yogurt Dressing
How to Cook Quinoa (and Why You Should!)